Students from Ruse Invented Car of the Future! 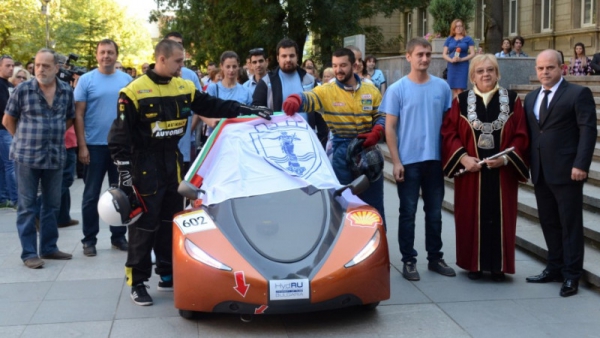 Students and lecturers from Rousse University invented car of the future designed to move in at urban environment without emitting harmful emissions.
Young inventors from Ruse’s University came with an idea to create a car powered by a hydrogen cell at the end of 2016. The innovative invention aim is to reduce to zero airborne emissions. The intention of inventing "green" car, inspired them and students to find support by their teachers and start hard working until they completed the project.
"In the beginning they surprised me, maybe because they did not believe in their qualities and abilities, and then they started working at 2-3 in the morning." says Dimitar Grozev, chairman of the Four-Wheel Academic Club.
The innovators strongly believe that they will be able to realize the idea of an eco-car. In two months they assembled the car of the future. In a long term, their goal is to become obsolete fuel-fueled cars.
"Green car is one of the frequently discussing topic recently. By 2030 the trend is to drop out diesel cars from urban environment", commented Dr. Ivan Beloev, a lecturer of Rousse University.
However, to be a person with such an invention you could have several requirements. To be less than 70 kilograms is one of requirements to eco-driver. Other rule is agility- you must leave the vehicle in 10 seconds in case of accident.
The Green Vehicle Team participated already in eco marathons for energy-efficient vehicles like the Shell Eco-marathon Challenger Event, which held in Bulgaria
Teams which participated in a race for the first time, tested and improved their vehicles, before join to the grand race in Istanbul, Turkey.
"The most valuable was the ability to test and check the level of development and to be able to join in the main competition - Shell Eco-Marathon Europe. I'm glad that we did it well we will be even more prepared, next year "said Ivan Beloev.