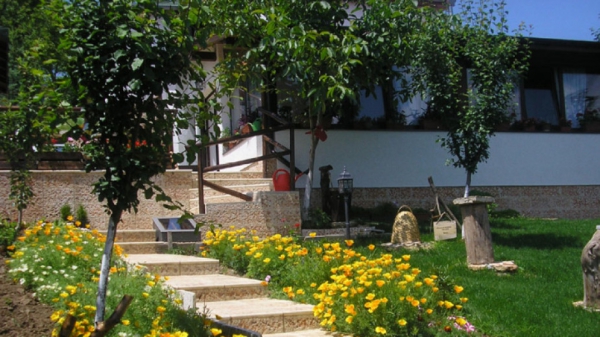 About 30 kilometres from the town of Dobrich, and only 15 from the Black Sea resort of Albena, stands the “Honey House”. For its owners – three generations of the Mihov family – it is a piece of paradise in a small mountain below Dobrudzha Plateau on Batovska River, the only river with an unchangeable watercourse in Dobrudzha.  Though retired, Nedyalka and her husband Dimitar, their daughter’s family and their three grandchildren are all engaged in tending bees without any outside help. The yields in the apiaries are lower than in other parts of the country because they do not apply intensive farming methods.

“We deliberately moved from Dobrich to the village of Prilep because we think that the bees’ place is in the forest,” says owner Nedyalka Mihova and adds:

“It was a dream of ours we had had for so many years and, together with my daughter’s family, we made it come true. They are such wonderful young people who believe in this occupation, and they left their lives in Sofia behind, their careers, so that we could work here, together. We aim to show natural products, as they were created by nature because consumption culture is very much changed. Many people don’t even know that genuine honey crystallizes, they melt the granules in a water bath at a high temperature which destroys many of honey’s valuable properties – medicinal and as a superfood. The other thing we wanted to show is that bees are an endangered species. That is why inside the house we have displayed, very prominently, the quote by Einstein: “If the bee disappeared off the face of the Earth, man would only have four years left to live.”

But who is the message conveyed by the “Honey House” targeted at? Nedyalka Mihova explains:

“The people who come here are mostly young families with small children. We want the young to realize that it is up to them to correct some of the mistakes our own generation have made and to protect nature. Urbanization and the easy life are a tasty morsel – people want everything, and they want it now. But in this way we have poisoned the earth – and that is the big problem.”

What makes the “Honey House” so special?

“We endeavoured to restore the old bee dwellings, as they were since bees have lived in our lands in ancient times. Because in our climate zone bees have been kept for thousands of years, beekeeping has always been a serious occupation,” Nedlayka says. “When they enter the house, the first things visitors see is a stone dwelling, a tree hollow, a wicker dwelling. We restored a dwelling made of clay from the oldest bee farm found in Israel which is 3,500 years old. The next thing are the sun wax melters which many beekeepers own.

Actually, they were invented by a Bulgarian.

We have a film showing one of our apiaries where we work, and many of the activities connected with beekeeping take place - like the extraction of the honey, the unsealing of the honeycomb. We have an apiary with 10-15 beehives we use for demonstrations, with all systems we, beekeepers work with. Visitors are fascinated by our two glass beehives. In one of them the bees develop as they would in the wild – there are no wooden frames and the bees have built the honeycombs. The glass makes the dance of the bees visible.”

When we talk of bees we usually think of the honey they make. Is that enough?

“I think that propolis actually has a higher medicinal value,” Nedyalka Mihova says. “Bees use honey and pollen to develop, as nourishment, whereas propolis which is collected from the tree buds is their medicine. It contains seven antibiotics and flavonoids which are involved in the battle against cancer cells. Beeswax is also very good for our health. All apiculture products are so valuable that Bulgaria actually used to pay its taxes to the Byzantine Empire - in bee products.”

The “Honey House” is open to visitors all the year round, and is popular with tourists from Bulgaria, but also from Germany, Russia, the Arab countries and even Japan.