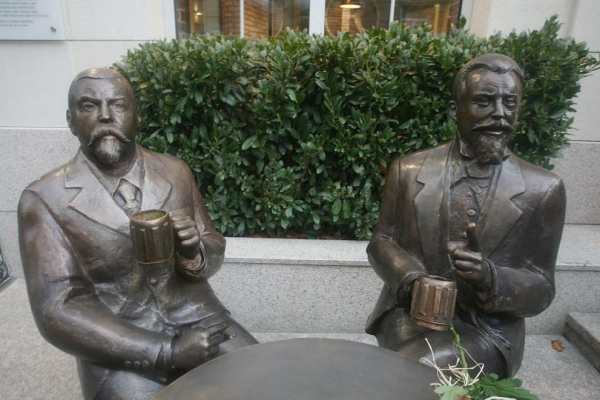 Sofia citizens now can drink beer with Proshek brothers-which related their life to Bulgaria, Georgi Chapkanov, the sculptor of the monument left three chairs next to the table, where famous Czechs have mugs in their hands.
The sculptor and a monument tablet of brothers Georgi and Bogdan Proshek were found at the place, where 133 years ago was built “Brother’s Proshek Brewery” /now Boulevard “Brothers Proshek”, opposite to the entrance of BNT/.
Prof. Georgi Chapkanov, Kosta and Stanislav Chapkanovi and architect Stanislav Konstantinov created the sculptor, on the anniversary of 170 years since the birth of the elder brother-Georgi Proshek.
The monument is an expression of respect for brothers Georgi /Irgi/ and Bogdan /Teodor/ Proshek-remarkable personalities, builders, public and cultural figures, which chose Bulgaria as their second homeland and built some of the most impressive architectural monuments in the capital, like Orlov and Lavov Bridges, the Beer Factory, beerhouse “Deep Cellar”.
Mihail Gruev –Director of Archive State Agency, mentioned that as society we have duty to those who together with the Bulgarian revivals participated in the construction of a new Bulgaria, and among them a main role had the Proshek brothers.