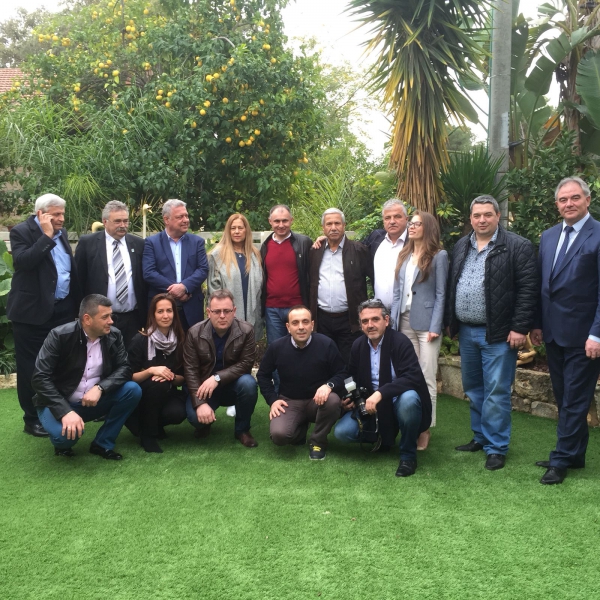 In the framework of the conference of the local government held last week in Tel Aviv, many mayors from various countries of the world, including from Bulgaria, arrived.
During the stay in Israel in a program that was coordinated in advance, the Bulgarian delegation of 12 mayors visited the home of Former Ambassador of Israel in Bulgaria, Mr. Shaul Kamisa Raz - in Hatzor, expressing appreciation and gratitude for the special cooperation and active presence of the former ambassador and his embassy staff. The meeting included a festive reception, a trip in the settlement provided from Mr Kamisa Raz out of his experience as a head of the Municipality, a view of the Golan Hights and a security review, all in a short tour of the settlement.
The most exciting part during the gift exchanges was the award of certificate of Honorable Citizenship from the city of Mizia by the mayor of Mizia, which was approved by its city council, including a sequence of images of the natural disaster that struck the city, causing the deaths of 2 residents and many damages, leaving many without shelter in the flooding of 2015. In a proactive manner, as an ambassador, Mr Raz together with all the staff of the Embassy, ​​the Bulgarian Red Cross, the Israeli Foreign Ministry, the Jewish Community together with Israeli and local businessmen, organized immediate aid and assistance in the rehabilitation and humanitarian support for the city and its residents in the framework of an operation "Warm heart". The operation received great praise and appreciation from the local and central government and the entire Bulgarian state.

After visiting Hatzor, the former ambassador traveled with the delegation to visit and meet with the mayor of Tzfat, a settlement in the alliance of twin cities with the city of Nikopol. The tour included a visit to the Old City and the ancient synagogue of Rabbi Yosef Caro, who lived for decades in the city of Nikopol and during this period even wrote his famous book "Shulchan Aruch".
The delegation was very happy and impressed by the visit to the north of Israel.

View the embedded image gallery online at:
https://ilovebg.bg/index.php/en/bg-positive-en/reports-on-happiness-for-bulgaria/item/260-bulgarian-delegation-of-12-mayors-visited-the-home-of-former-ambassador-of-israel-in-bulgaria-mr-shaul-kamisa-raz#sigProIdc5451e4408
back to top