I Love Bg President Mr. Avinoam Katrieli (also President of BCCBI) Together with The Red Shield of David Donating Ambulances for the Bulgarian Red Cross 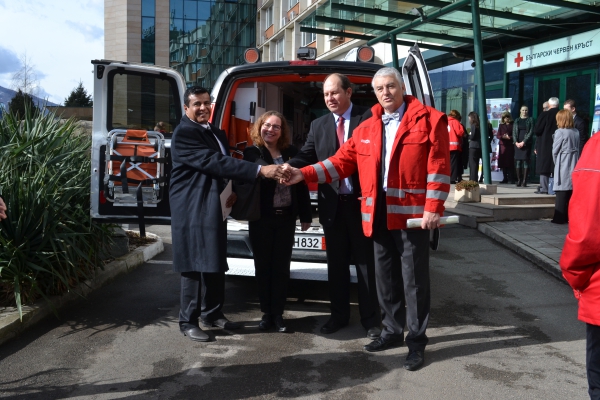 The chairman of the Israeli Magen David Adom, Noam Ifrah, handed to the President of the Bulgarian Red Cross Hristo Grigorov keys of two medical vehicles. Official guests of the event were Hon. Mrs. Irit Lillian, Ambassador of the State of Israel in Bulgaria, Avinoam Katrieli, President of I Love BG Foundation and also President of BCCBI, the Executive Director of insurance company Lev Ins Mariana Maslarova, Secretary General of the Organization of Jews in Bulgaria Joseph Melamed.

"I know the capabilities of the Red Cross - we have worked together after the bombing in Burgas. Just in the short time of our flight to Bulgaria, dozens of volunteers with the sign of the Red Cross and many ambulances were waiting for us at the airport, ready to work together to overcome the damages from the terrorist attack. I was surprised by the timely organization and scale, their capacity to act quickly and appropriately in crisis situations "- said Noam Ifrah. HE Irit Lillian thanked for the opportunity to attend this event and claimed this act of charity can be viewed in a wider context, as of greater social importance. She spoke of the Israeli tradition “Tikun Olam” (“to make the World a better place”). Her Excellency wished the Red Cross not to have to use the ambulances, which would mean that the people in Bulgaria stay healthy.
Mr. Katrieli, the President of I Love BG Foundation, said that Magen David Adom is the best and most effective unit for reaction in Medical Emergency in the World and their help and support for the Bulgarian Red Cross is expressed with donations of ambulances but also with education. Unfortunately the coming days hold high probability for those qualities to come into use and it is good to have assistance from such an organization.
"Red Cross and Red Shield of David of Israel have a long-term partnership and our cooperation is very active. We are deeply grateful for the experience and best practices in rescue operations that are exchanged with Israeli counterparts. Because, as Mr. Avinoam Katrieli said, Israeli Magen David Adom is the best organization in the World to work in crisis situations with multiple casualties. "With these words, President of BRC Hristo Grigorov accepted the keys of the two medical vehicles.

After the ceremony the agreement on cooperation between the Red Shield of David of Israel and BRC was countersigned. The two organizations will continue their partnership in the field of exchange of expertise in rescue activities in international operations support, as well as training, management and transfer of know-how in the field of emergency aid.

View the embedded image gallery online at:
https://ilovebg.bg/index.php/en/projects/item/35-i-love-bg-president-mr-avinoam-katrieli-also-president-of-bccbi-together-with-the-red-shield-of-david-donating-ambulances-for-the-bulgarian-red-cross#sigProId335cde889d
back to top